The White Hotel in Salford is neither a hotel nor is it white (more like a little off-white). It’s a former car repair garage, now a night club. It still feels more like a garage than a night club. And it was cold, very cold – to be fair, I had been warned. It reminded me of another local venue, The Haçienda, a former yacht showroom, which was cold and cavernous in the days before it became an extension of Ibiza and was always full. And before the concert itself started one of the songs sounded played by the DJ sounded like Manchester band The Fall, who played at the Haçienda.

I forgot the cold in the intense white heat of the stunning first half, as one piece metamorphosed into another to create a strangely coherent whole.

The Collective performed only a few feet away from the audience who surrounded them. And being so close to the performers (I could read the cellist’s score over her shoulder) meant that we felt part of the music making. The intensity of the performers’ concentration was almost visceral.

The first half began with a gently-sung, quietly kind, introspective Bach chorale which metamorphosed into some of the most fiercely rhythmic string playing I have ever heard, in part of Vivaldi’s Four Seasons. There were also excerpts from Ligeti’s terrifying First String Quartet Métamorphoses Nocturnes, which echoes the quartets of Bartók to the extent that the composer György Kurtág called it ‘Bartók’s seventh string quartet”. Having just re-watched Stanley Kubrick’s The Shining for about the fourteenth time, Jack Nicholson limping through the snow with an axe in his hand and a snarl on his face, sound-tracked by Ligeti and Bartók, loomed in my imagination. The pieces were seamlessly glued together by interludes or Vignettes composed by Paul Clark, to make a cohesive whole.

The baleful barking of a lonely dog outside in the empty Salford night punctuated the first half of the concert; at one point I was convinced it was barking in perfect time with the music. A curious incident of a dog in the night time.

The second half began with Rakhi introducing The Centre is Everywhere, a new piece for strings by Edmund Finnis. She said we would need to listen intently to the sounds that Finnis conjures from the strings, starting with almost white noise. It’s a remarkable piece, with scurrying strings above more slow-moving themes, like the wind disturbing the surface of the ocean.

Then came Metamorphosen by Richard Strauss, introduced by a quote from his diary, written as he sat in the ruins of Munich at the end of WWII,

The most terrible period of human history is at an end, the twelve-year reign of bestiality, ignorance and anti-culture under the greatest criminals, during which Germany’s 2000 years of cultural evolution met its doom.

Originally written as a piece for 23 solo strings, it metamorphosed into something entirely different in this version for seven solo strings. The post-Romantic, smeared, almost surreal blur of the original became at times as limpid as a Haydn string quartet, every line sparklingly clear. A revelation.

When I think of Sir Stephen Cleobury who has just died my image of him is conducting the service of Nine Lessons and Carols from King’s College Cambridge on Christmas Eve. 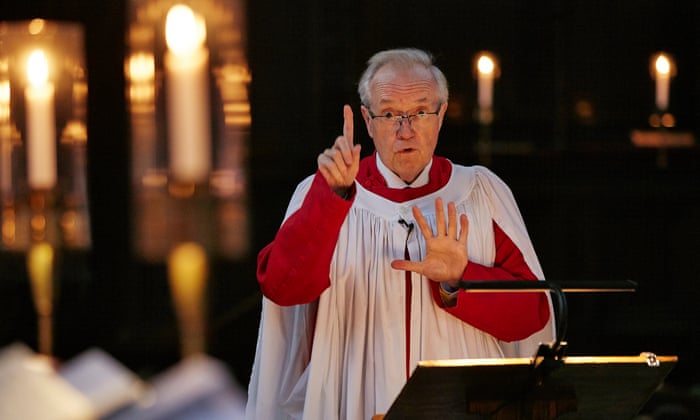 The festival of Christmas was central to my relationship with my Father who died twenty-five years ago.  I always used to listen to the Nine Lessons with him.

It’s Christmas Eve and Durham cathedral is full. We got there early for the carol service but we’re still stuck behind the widest pillar.  We can’t see the choir singing the carols but it doesn’t matter. The lights go out and the choir comes in with candles. The sweet solo voice sings the first verse of Once in Royal David’s City, just as in the opening of the service of Nine Lessons and Carols from King’s College Cambridge.

The years roll back and I am with my Father again.

He always insisted we call him Father, not dad. We once played cricket with him in the park and two young urchins came to join our game. Cheekily, they called him Father Dear Father, mocking my use of the word. I hadn’t realised until then that his title was archaic. Later, when I was away at university, he wrote me letters and notes always signed just F, short for Father.

When I started to sign my letter simply with a letter N for Nick, my friends complained that this felt cold. Couldn’t I be bothered to sign my full name? But the simple F at the end of my father’s letters always seemed warm to me, a private, intimate code.

To others, he signed himself JCH, short for John Charles Holmes. He was the choir master of the local church and I was in his choir. The choir boys bought him a leather music case engraved with his initials. He carried it with him to every choir rehearsal. It got more and more battered, but you could still see the black letters JCH engraved on it.

I remember my Father walking home from church with me, carrying his music case as we discussed our visit to the local maternity hospital to sing Christmas carols. We went every year, to sing a carol service in the hospital small chapel. Then we came back to church to put away the robes we had worn for the carol service.

The choir vestry was a cellar beneath the church. We unloaded the robes from ancient suit cases and hung them up on long rails. We climbed back up the stone steps to the side door of the church and locked it with a heavy key. Then a shortcut across the grass to vault over a low wall, checking first that the Reverend Canon Ronald James Birchett – RJB – wasn’t watching.

RJB had been an army captain and took a dim view of civilians who took shortcuts across his churchyard. My father was in awe of RJB but they shared a deep belief in the true meaning of Christmas.

RJB is central to my childhood memories of Christmas Eve. He was tall, broad, proudly strong. His voice was deep and his face was sculpted from granite. So when this proud man went down on his knees to utter the words which marked the birth of Christ, the packed church was silenced by his humility before God.

After that, we choirboys could relax a little. We knew Jesus was about to be born and so Christmas presents were on their way. Midnight Mass actually started at 11:30 at night so there was a silent countdown until midnight came. Christ’s birth on the dot of midnight was marked by choirboys grinning and cheering silently across the choir stalls, always making sure RJB couldn’t see our celebrations.

So the service ended for another Christmas Eve, and my father greeted each choirboy with a cheerful happy Christmas and a box of chocolates.

Christmas Day itself almost seemed less important to him. Christ had been born, so the pagan rituals of exchanging presents, eating turkey and watching the Queen’s speech meant little to him. One year, he even forgot to buy me a Christmas present until my mother reminded him and he ran to the shops to buy something before they closed.

My father died 25 years ago and I don’t think about him every day now, although at the time I vowed I would. But he is still a part of me and at Christmas I feel particularly close to him. I said this to my wife as we were coming out of Durham Cathedral on Christmas Eve. She replied it was natural for me to remember him more at Christmas, because it was his time of year.

Leo Hussain @conductorleo wrote the following tweet about Stephen Cleobury on 23 November 2019, but it also perfectly describes my Father

He wasn’t affectionate, but you knew he cared deeply about you. As a musician, he was rigorous, disciplined, loving, had huge integrity and the highest standards. I couldn’t do what I do now without him.

A Cornucopia of Riches

What did I just experience?

Was it a gig? (a term now debased anyway as it’s often linked with the word ‘economy’) Was it a show? A multimedia experience? Certainly, it was a fascinating glimpse into the mind of Björk Guðmundsdóttir.

Nobody calls her that now of course, except her mother (and then only when she’s upset with her daughter). But to be reminded of Björk’s Icelandic roots is appropriate as the evening opened with songs from the Hamrahlíðarkórinn or The Hamrahlid Choir from Iceland. Björk told us later that she joined the choir was when was 16. They sang Icelandic songs, beautifully and a cappella, including a final song in which vocal glissandi combined with a tuneful theme. Not easy – The Sixteen or the Tallis Scholars would have enjoyed the challenge.

So we established from the start that this wasn’t going to be conventional rock show, although as Björk said later ‘flutes rock’ (who knew)? The main instrumentalists were seven flautists (of course…) Standing on the high platform on the stage, silhouetted against the video screen, the flautists raised their flutes to the heavens like angelic Pipers at the Gates of Dawn.

Another Pink Floyd reference springs to mind – some of the visuals early on were reminiscent of the animations that Gerald Scarfe did for the Floyd when they played live – surreal plants intertwining:

And Pink Floyd are useful reference point; they started the idea of a rock gig being more than just about the music, from their early psychedelic light shows to building A Wall across the stage. Björk took this much, much further – her visuals were enigmatic, wildly colourful, sometimes 3-dimensional. At one point it appeared that humans were falling from the sky, at another a monumental prison cell was invaded by large objects crashing through the walls, attacking the humanoid creature inside. Two conjoined human half- beings writhed and danced in space. An avatar of Björk sometimes mouthed the words she sang. There was no Wall but a huge diaphanous curtain which was sometimes pulled across the front of the stage to give depth to the visuals, and at other times pulled back to give crystalline clarity to the images.

Björk herself stood mostly at the front of the stage, wearing a mask that obscured the top half of her face but didn’t obscure her mouth out of which flowed a voice more mellifluous than has been heard from her ever before. She even went inside an onstage igloo to sing one of the songs on her own, our only view of her from a camera, her voice stunningly clear.

There was only really one slight weakness to what would otherwise have been one of the best shows ever. There were times when some of the songs, at least those from her latest album Utopia had what Alex Petridis in his Guardian review of the record describes as having ‘central melodies which sometimes seem troublingly slender’. But that’s hardly worth mentioning.

What is worth mentioning is that very few live experiences (and experiences in life) compare with what I saw last night…one that does is the Biophilia concert at Manchester International Festival in 2011, starring and created by a little-known Icelandic singer called Björk Guðmundsdóttir.